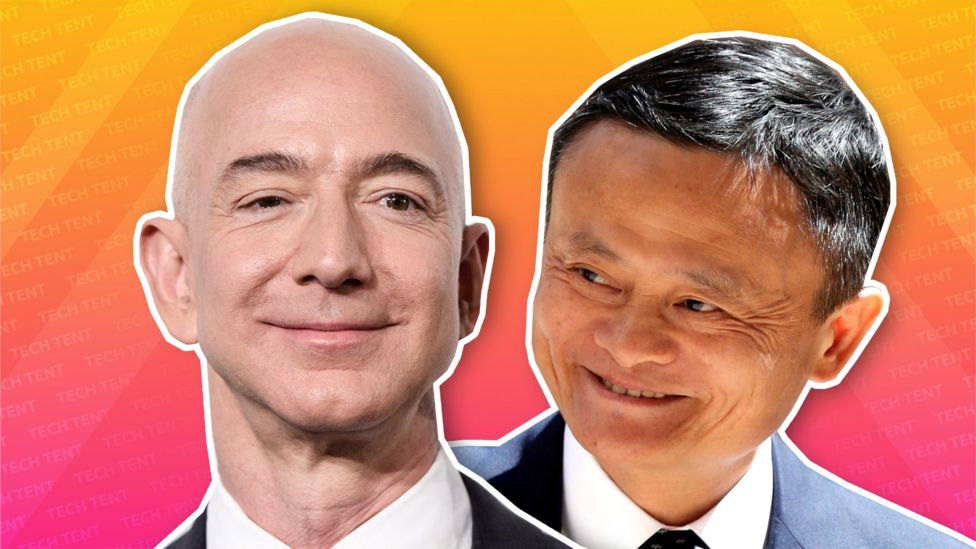 Tech Tent: What next for the stars of online retail?

Amazon and Alibaba, the two biggest players in online retail, have both unveiled stellar results. But the American and Chinese giants each face leadership and regulatory challenges, with Amazon's Jeff Bezos stepping aside as chief executive and Alibaba's Jack Ma under scrutiny from the Chinese authorities. On this week's Tech Tent podcast, we compare the two companies and explore where they head next. Listen to the latest Tech Tent podcast on BBC Sounds What is clear is that both Amazon and Alibaba have received a huge boost to their finances during the pandemic, with millions more people shopping from home during lockdowns. Amazon's revenues soared in the last quarter covering the holiday season, up 44% on 2019 to $126bn (£92bn). Meanwhile Alibaba had a 37% increase in its sales to $34 billion (£25bn). Each company also reported surging sales and profits for their cloud-computing divisions. Amazon Web Services (AWS) accounted for more than 60% of the company's entire operating profit for 2020. Meanwhile, 11 years after it was started, Alibaba's cloud business made its first profit, with revenues up 50% on the previous year. But both businesses' results were overshadowed by news about their founders. For Amazon, it was the moment Jeff Bezos chose to announce he was stepping aside from the day-to-day running of the company he started in 1994. While the announcement was unexpected, the fact that AWS boss Andy Jassy is taking over appeared to impress the markets and Amazon's shares barely moved. By contrast, Alibaba's investors have plenty to worry about. The Chinese authorities seem determined to toughen up regulation of one of the country's biggest tech champions. And while founder Jack Ma stepped back from running the business a while back, he remains at the heart of the controversies about its power and influence. A speech he made last year about a lack of innovation in Chinese banking seemed to anger the government. It may have been behind Ma's disappearance from public view for a few months and the regulator's move to halt the IPO of Ant Group, his fintech business, which is partly owned by Alibaba. The BBC's Asia business correspondent, Karishma Vaswani, tells us that Jack Ma remains the superstar visionary driving the future of the company. "He is a larger-than-life character. He represents innovation in China. He is typically seen on the global stage talking about how he went from rags to riches. He's somebody people really connect with," she explains. But she says that prominence may explain his problems with the authorities. "He became bigger than the Chinese state itself," she says. Jeff Bezos had a few similar problems with the US government, with his ownership of the Washington Post making him a target for President Trump, who referred to him as "Jeff Bozo" in one tweet. Under the Biden administration the personal animosity is gone but issues such as working conditions at Amazon and its market power will continue to draw criticism from American politicians and regulators. Still, it's Google and Facebook that appear to be a bigger target for regulation. Overall, it's China's Alibaba that appears to have more to fear from its government than the US's Amazon. Both Jack Ma and Jeff Bezos will continue to play roles in the companies they founded. But Amazon's founder may have a more relaxing time, enjoying his huge fortune and his space and climate-change ventures without worrying too much about offending his government. Source: https://www.bbc.com/news/technology-55949106